‘The end of love looks like the beginning of war.’

‘For a start, people who traveled for so many miles through such horrific conditions in order to find work cannot accurately be portrayed as lazy benefit-scroungers.’

‘Recognize yourself in he and she who are not like you and me.’

A review of: Cilka’s Journey – By Heather Morris.

Cilka’s Journey, by Heather Morris, is the sequel to ‘The Tattooist of Auschwitz‘, which is based on true stories from World War II in Nazi Germany.

The novel follows the journey of Cilka Klein, who is taken to Auschwitz-Birkenau Concentration Camp when she is just 16 years old. When she arrives, Commandant Schwarzhuber notices her beautiful long hair and separates her from the other prisoners.

Cilka suffers ongoing sexual abuse from two S.S. Officers and is given horrific tasks, which she must do to survive. But these tasks and her perceived position of power create feelings of anger from the other prisoners.

When Auschwitz-Birkenau is finally liberated when Cilka is 18, she is condemned for her role at the Concentration Camp. Cilka is charged as a collaborator for sleeping with the enemy and sentenced to 15 years hard labour in a Siberian Prison Camp – Vorkuta.

Imprisoned once again, and guilty only of surviving, Cilka faces challenges both new, and yet also horrendously familiar. She finds herself taken under the wing of the female doctor at the camp, and begins training as a nurse, determined to help others survive.

Cilka’s story is one strength, determination and survival, even in the harshest of circumstances.

Just like ‘The Tattooist of Auschwitz’, ‘Cilka’s Journey’ saddened me deeply. Her story is one of many million suffering souls, forced to experience the unbearable.

The novel carried over nicely from the first installment, with flashbacks of Cilka’s time in Auschwitz-Birkenau to provide context and perspective. The Author, Heather Morris, did her research (and well) – providing a harrowing experience of what life must have been like for thousands of people post-war.

My only criticism of this book is the same one I had for ‘The Tattooist of Auschwitz‘, which was that the novel sometimes seemed rushed – especially toward the end. It seemed as though the ending was squashed in as an afterthought, becoming a tad predictable.

That being said, ‘Cilka’s Journey’ was still an exceptionally moving, heartbreaking and gut-wrenching account of the atrocities of both during and after World War II.

Whether you have read the first novel or not, ‘Cilka’s Journey’ is worth the read.

A review of: All The Light We Cannot See – By Anthony Doerr.

All The Light We Cannot See

‘All The Light We Cannot See’, by Anthony Doerr, is an incredibly moving story of a blind French girl (Marie-Laure) and a German boy (Werner) whose paths collide during the second World War.

Both Marie-Laure and Werner have very different struggles as the war begins to devastate Europe. Marie-Laure re-locates to her Uncle Etienne’s house in Saint Malo from Nazi-occupied Paris, while Werner escapes his poverty-stricken orphanage in Germany by securing himself a place in a Hitler-Youth Academy.

Marie-Laure begins to go blind at a young age, and has to learn to navigate the world in a completely different way, with the help of her father, who works at a museum. Young, determined and capable, she finds solace in the wonder of the outside world – feeling her way through sounds, smells and miniature models of the city, made by her father.

Eventually, Marie-Laure and her father must flee to her reclusive Uncle’s house, who lives in a tall building on the coast of Saint Malo.

Across the border, Werner lives in an orphanage with his younger sister Jutta. Inquisitive and exceptionally bright, Werner tinkers with old radios, fixing an old one up to listen to with Jutta. They listen to a nightly science program together, which inspires Werner, who writes down his many questions about the universe in a small journal.

Werner’s talent with fixing radios soon makes him popular in the village, and his skills in math eventually win him a spot at a coveted Hitler-Youth Academy – where he can escape an otherwise gloomy life of coal mining in the village.

Eventually, Werner finds himself amidst the action, helping Germany locate radio signals from the enemy, where he sees first hand just how damaged the country has become.

‘All The Light We Cannot See’ is a true work of art. The parallel lives of Marie-Laure and Werner are wonderfully written – it is teeming with detail and single moments that took your breath away. The back and forth story-telling by Anthony Doerr provides a stark insight into how utterly different the lives of two young people can be.

The story-telling in this novel was incredibly detailed, reminding the reader that there is an unseen world all around us, filled with love and loss and everything in between.

Although heart-breaking at moments, this novel was beautiful and truly moving to read. This novel writes in a way that made it easy to see just how easily our fates can be woven and unwoven, without ever knowing what could have been.

‘Human security depends on a system where each rational individual calculates that it is more profitable not to rebel.’

‘Only the dead have seen the end of war.’

A review of: The Girl From Munich – By Tania Blanchard. 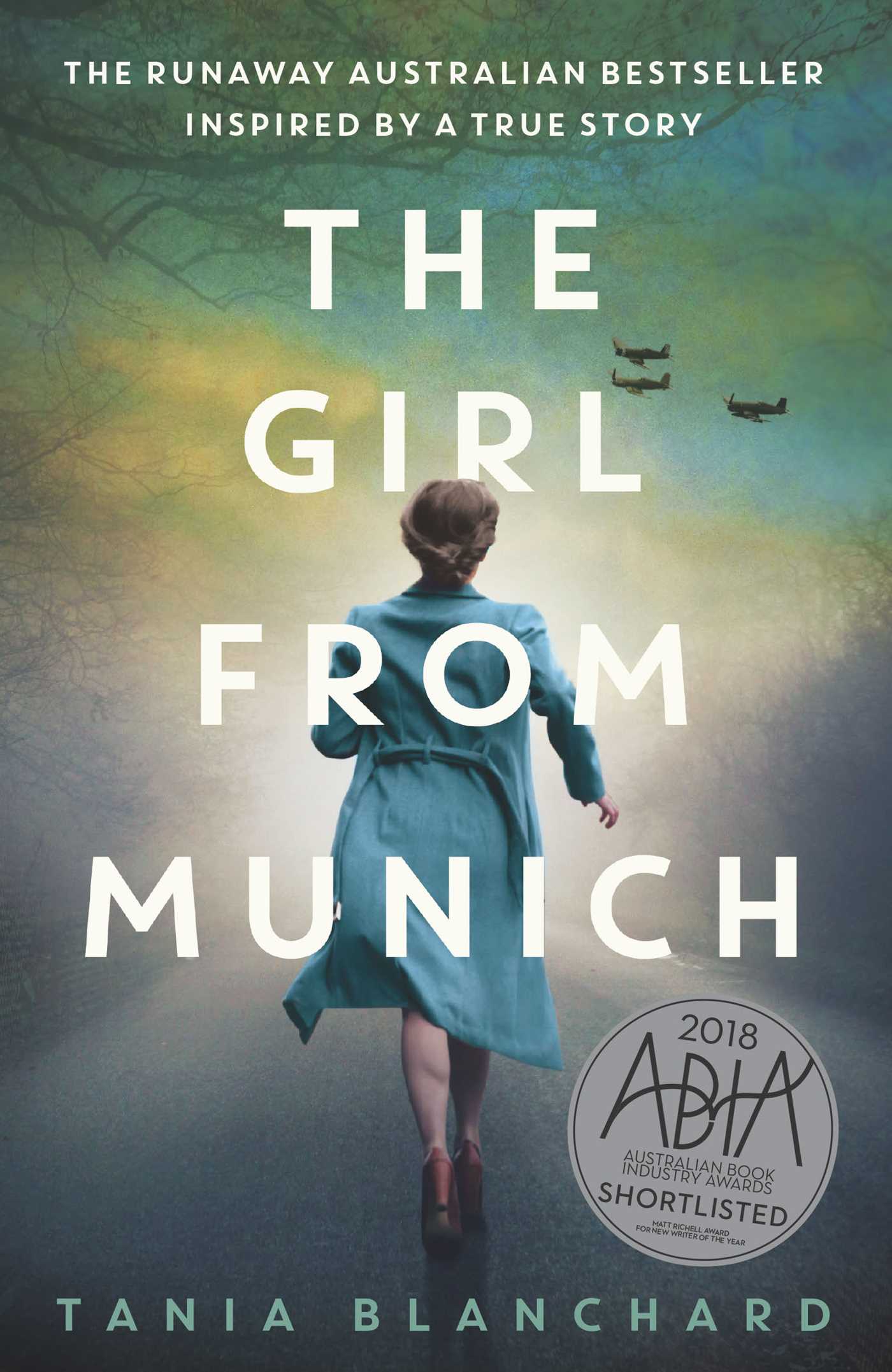 The Girl from Munich

It’s 1943, and the war is turning against Germany.

Charlotte (or Lotte), has grown up in Hitler’s Germany, living a life of privilege in her upper-class family. Loyal to her country, she has plans for her future – just like everyone else. She dreams of a fairy-tale wedding to her childhood sweetheart, and working as a photographer. But as the war begins to ramp up, the life Lotte once knew begins to crumble around her, and she is forced to question everything she thinks she knows about love, freedom, her leader and her country.

Lotte is just a girl, with dreams of a career in photography that are cut short by her parent’s disapproval. She instead settles into her position as secretary for the the Luftwaffe (Aerial Warfare Branch).

The story of Charlotte (or Lotte), by Tania Blanchard, is an incredible insight into what life was like amidst the chaos of World War II – from a German Civilian’s perspective.

When we are first introduced to our main character, Lotte, it seems she is a somewhat naive girl, sheltered by the world by her privileged upbringing. She dreams of travel and a lavish wedding to her childhood sweetheart, and making a living with her photography.

But as the war rages on, Lotte is forced to find work elsewhere, ending up at the Luftwaffe, while her fiance is sent to the front-line. As her story unfolds, Lotte is forced to grow up, accept reality and learn a new way of living in order to survive.

Blanchard shows us the ways in which war changed people and took away the normalcy of life and replaced it with unimaginable scenarios. She describes in detail the sacrifices people were forced to make, from a civilian perspective, proving that no-one was left untouched by the war.

Blanchard shows us, through the character Lotte, that there was so much lost and so much to rebuild, even in the years after the war. It is a sad reality, but one that encapsulates so much history, in such a meaningful way – shining light on the small triumphs and moments of happiness, and proving that even in the darkest of places, there is hope for a better life.

On this ANZAC Day, I would like to share a poem that is not my own, but is deeply moving. This poem was written by Robert Laurence Binyon and first published in London in 1914 in the ‘Winnowing Fan; Poems of the Great War’.

The Ode which is used in remembrance ceremonies on ANZAC Day and Remembrance Day comes from this particular poem.

With proud thanksgiving, a mother for her children

England mourns for her dead across the sea,

Flesh of her flesh they were, spirit of her spirit,

Fallen in the cause of the free.

Sings sorrow up into immortal spheres,

There is music in the midst of desolation

And glory that shines upon our tears.

They went with songs to the battle, they were young,

Straight of limb, true of eyes, steady and aglow,

They were staunch to the end against odds uncounted,

The fell with their faces to the foe.

They shall not grow old, as we that are left grow old:

Age shall not weary them, nor the years condemn

At the going down of the sun and in the morning

We will remember them.

They mingle not with their laughing comrades again,

They sit no more at familiar tables of home,

They have no lot in our labour of the daytime,

They sleep beyond England’s foam.

But where our desires and hopes profound,

Felt as a well-spring that is hidden from sight,

To the innermost heart of their own land they are known

As the stars are known to the night.

As the stars shall be bright when we are dust,

Moving in marches upon the heavenly plain,

As the stars that are starry in the time of our darkness,